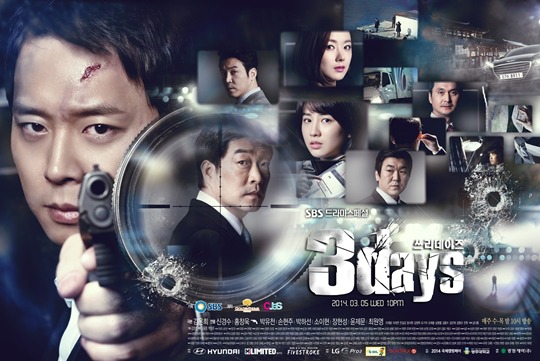 Han Tae Kyung (Park Yoo Chun) works for the Secret Service. He visits his father at the hospital. His father got into a car accident last night and currently in critical condition. He looks at his father for a while before he gets back to work. President Lee Dong Hwi (Son Hyun Joo), who is in his third year service as South Korean president, decides to visit the traditional market. Han Tae Kyung is on the job to protect the President from getting hurt. His phone keeps ringing and he feels that something happen to his father. Suddenly, a man throws white powder to the President and the secret service immediately bring him to safety. Later, Tae Kyung finds out that his father passed away. He is asked to take leave so he leaves his badge and attend his father’s funeral.

During the funeral, Officer Yoon Bo Won (Park Ha Sun) arrives and asks Tae Kyung about his father’s death including the missing white envelope. She believes that his father is actually murdered, not getting into a car accident. Tae Kyung starts to find out the mystery behind his father’s death until he notices that it is related to the President after he hears from a dying man that the President will be killed on 5 March. He goes to the villa where the President is staying for a short break. He is stopped by the soldiers as he doesn’t have the badge with him. All of the sudden, three gun shots are heard from afar at the President’s villa. Tae Kyung courageously looks for the President while uncovering the secrets along the way. 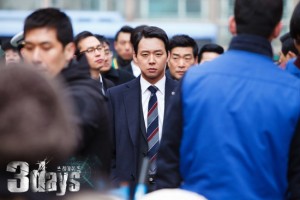 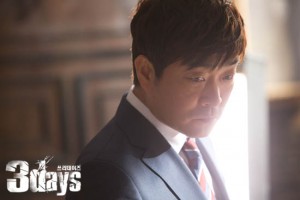 It has an interesting storyline with a unique concept. Each scenario is based on how the characters are dealing with within three days. Each episode ends with a day and time that makes me anxious of how on earth they are going to settle this while lives are at stake. At the same time, the good guys are unfolding the mystery behind the 1998 Yangjiniri incident. I visually see “chapter by chapter ” scenarios which make me get so excited and wanting to know more about the hidden secrets. There were a lot of scenes and surprises where I gripped my hands as I wonder what happen to the characters. Scenes like whether the President is safe and sound after the shooting incident at the holiday villa, finding the bombs, and getting the truth out to the public grip the audiences’ attention in the whole twist and turns of manic chaos. Yet, during the second chapter, where the good guys have to look for the bomb, it has lost of focus as it drags a little bit longer, with plenty of action scenes, than I expected. Still, the writers manage to get back on track in making the storyline exciting till the very end. 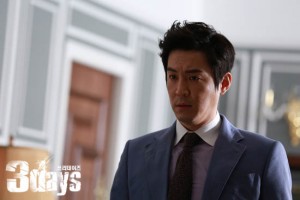 In 3 Days, there is a lack of balance between male and female characters. The male characters shine as they are the ones who do most of the intense action scenes. They go against each other with the concept of trusting each other and finding out who is the betrayer. Tae Kyung has doubts of what he should do but still wants to protect the President. The President courageously do what is best for the society even though he know that he done a grave mistake in the past. CEO Kim Do Jin (Choi Won Young), the bad guy, is a total nuthead who believes power and money makes him control the whole wide world. Put three of them together and you are going to see continuous battle going on as Tae Kyung and the President save the world from political and financial chaos. There is plenty of action and intensity going on for the male characters. 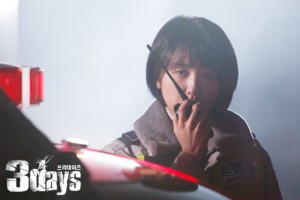 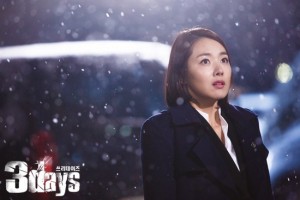 On the other hand, the female characters, Yoon Bo Won and Lee Cha Young (So E Hyun), are made to be the victims. At the same time, they try to be the dynamic woman who can beat the bad guys. Still, they are not highly focus on them as all eyes are on the guys who are the ones in the mental and physical battle in a intense world of sanity. Although there is some character development for the female characters, it is still not enough. There is not much going on for them but some bits of intend to save the world can been seen throughout this drama. However, they are able to let audiences know that Tae Kyung’s sensitive side as he concerns about the both of their safety. So, they are great supporting female characters but more to making them the ‘damsel-in-distress’. 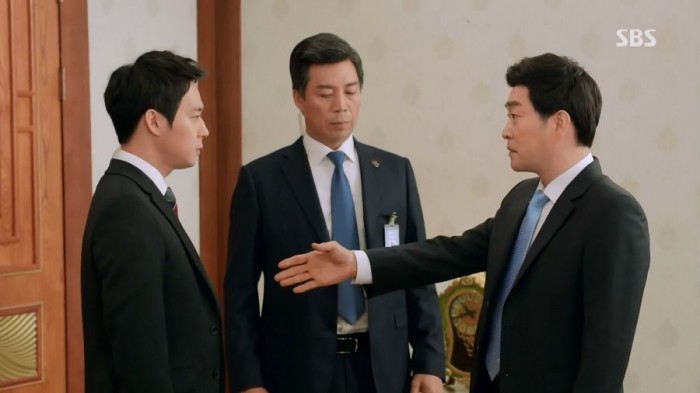 The casts did a splendid job on being on the move and conveying emotions in 3 Days. Park Yoo Chun proofs that he continues to develop his acting talents especially when acting in different drama genres. As this is the first time for him to act in an action drama, not only he portrays with serious emotions but also getting involved in fighting against the bad guys including Kim Do Jin’s henchmen. He is willing to challenge himself to in doing fighting scenes without breaking a sweat. Son Hyun Joo has fatherly features but the scary and serious vibe gives me goosebumps. At the same time, you can tell how emotional and serious he is based on his facial gestures, tone of his voice, and eyes. He is able to portray the President who worries but also has the courage to do what is right for the society. Both of them have the perfect chemistry on portraying their characters who are in tight situations while signifying their friendship, trust, and courage.

3 Days has a unique concept with plenty of action going on while focusing on trust as you will see who are the friends and enemies. The mystery of 1998 Yangjiniri incident, getting the truth out to the society, and saving the society gets your attention because of the storyline even though, in the middle of the drama, there is a lack of focus. The casts, including Park Yoo Chun and Son Hyun Joo, did well especially the intense fighting action scenes. If you are into watching action dramas, I would recommend that you should watch this one as there are plenty of actions but also sparks your curiosity on each scenario happening in three days.