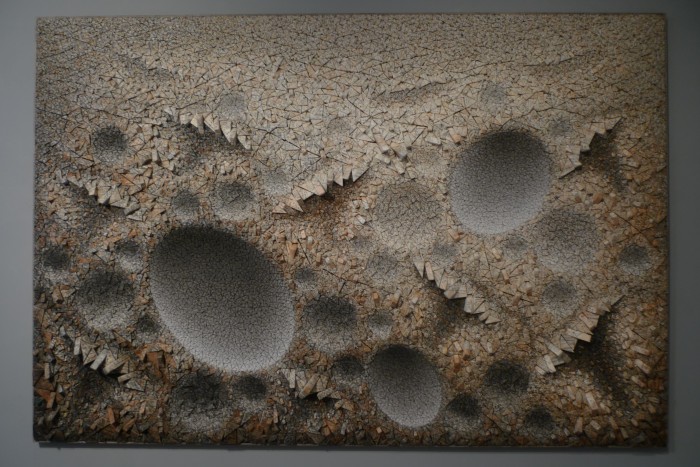 Chun Kwak Young is known to relive the materials into forms of contemporary and abstract artworks that are amazed and appreciated by visitors in modern society. Since 1969, Chun has been involved in the Abstrct Expressionism. He went to Philadelphia to study painting after his graduation from art school in Korea. Through his experiences, during the times of the rise of US counter culture to the explosive civil rights movement, he was caught between the rise of technology and humanistic view including Asian traditional values. Even way before that, he has experienced the changing histories in Korea (eg. the Imperial Rule of Japan, Unification of Korea, and three years involvement in war) which influenced his thoughts about Korean art. Thus, he has decided to draw some of experiences through his works of Abstract Expressionism with emphasises on Korean sources. One of the Korean sources is hanji, Korean mulberry paper. 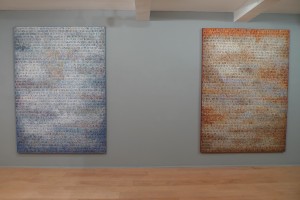 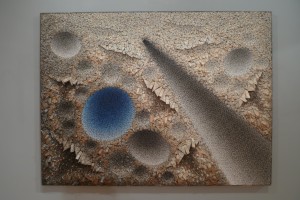 To mark Chun’s 70th birthday, the ‘Aggregaration Series’ is exhibited at the Bernard Jacobson Gallery, London. This series started in 1995. One day in that particular year, when Chun was ill in the studio, his wife brought him a package of medicine. The packaging reminds him of his childhood memories where the Chinese medicines are wrapped in parcels and hanged at the ceiling of his uncle’s room. With that, he decides to recreate these wrapped packages in forms of contemporary aspect while recalling his precious memories. He collected the hanji from various ancient books, texts and official documents, since the 15th century that has two languages (Chinese and Korean), from second-hand bookstores. 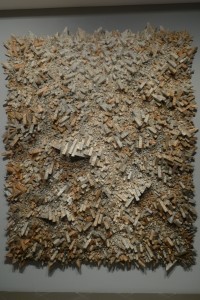 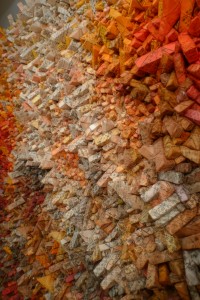 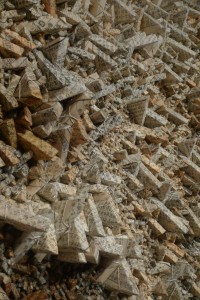 Then, he wrapped the hanji around the traingular blocks of styrofoams in forms of bojagi, a traditional Korean custom to wrap diverse objects. These wrapped triangular blocks are placed within the cubist collage strategically. Some of these triangular blocks are painted with natural dye. Work by work, he has transformed these collages from simple colour hanji paper to various colours and forms that are based on natural world and viewers’ minds. At the same time, he revives the importance of Korean materials and traditions through forms of modern abstract forms. 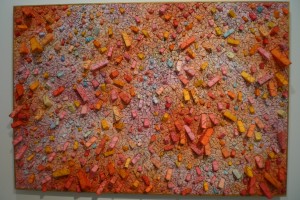 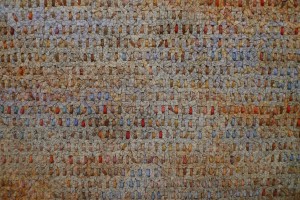 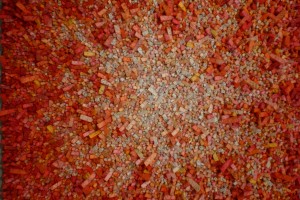 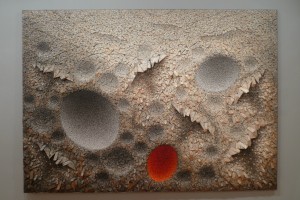 I was amazed by how each work consists of every single hanji wrapped triangular, with different sizes, are combined together. Detail by detail and colour by colour that represents both culture and psychological mind set. From looking afar, some works look like tapestries. When taking closer look at these works, you could see that each hanji wrapped piece, with and without colour, in detailed. They signified certain aspects of how Chun’s thoughts are in terms of Korean art, experience, and culture. I am sure that the viewers have similar thoughts as him. I felt that each work represents feelings, moods, and experiences that are explored and revealed from each person’s mind and heart. Also, I was impressed with Chun’s capabilities of placing Korean traditional materials, hanji, in contemporary mixed media that evokes meaningful messages and stories that need to be told. A well-balanced of traditional and contemporary; a well-balanced Korean and Western art values. 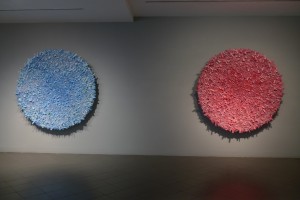 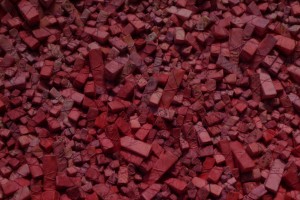 ‘Aggregation Series’ is truly has remarkable artworks that attracts both old and young viewers in appreciating Korean traditional art within contemporary setting. Chun’s works, titled New Works, including ‘Aggregation Series’ is currently exhibited at the Bernard Jacobson Gallery between 12 March – 17 April 2014. Kwang Young Chun: Mulberry Mindscapes, published by Rizzoli New York, will be released on 15 April 2014. The book features Chun’s oldest till the current artworks that he has made for almost twenty years. More information can be found through Chun’s official website.