An Overview of Korean Publishing Market 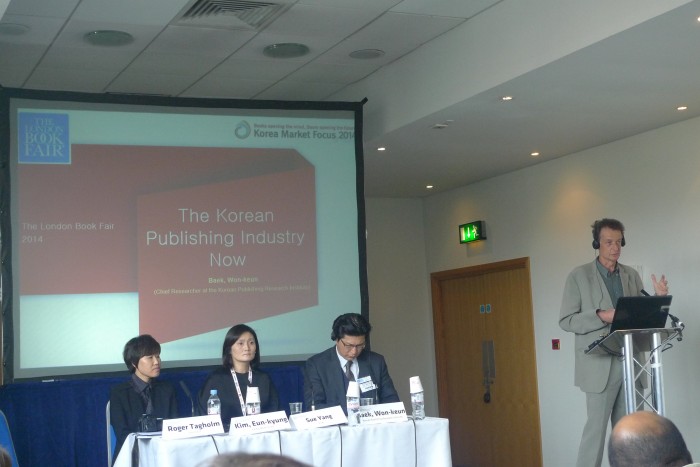 The very first talk that I attended during the London Book Fair 2014 is “An Overview of the Korean Publishing Market”. It provided some general insights about what a few historical facts and current insights about the Korean publishing market. The speakers explained about the titles, market share, popular titles based on genre, and technology.

Most of the data that the speaker explained are gathered in 2012 and 2013. Between 2008 and 2012, different categories of titles except educational books in the publishing industry were 11.7%. There was a heavy emphasis on education, including textbooks and school reference, that consisted of 65% of the total market. The e-book market was 4.55%. The number of publishers that are registered at the administrative agency is 42,517. 4 out of every 10 publishers have published translated titles. The book market, which has about 1,800 book stores, are shared based on the distribution channels both physical and online book stores. The book market use the resale price maintenance system and consignment sales system but these have limitations (eg. law and distributors internal resources and capabilities) that affect the book sales.

The speaker said that literature, children’s books, and manhwa from Japan, America and the UK were translated. Out 912 translated titles from the UK consisted of children’s books, literary works, and social science books. Next, he talked about the difficulties of participation in the digital publishing market in Korea . As Amazon is planning to enter into the Korean market, there were doubts and worries about the binaries between physical books versus e-books. However, many Korean readers use SNS and POD to browse through the books.

He moved on in talking about the readership in Korea. 73% of Koreans above 15 years old read books. Koreans above 18 years old read 9.3 books a year while primary and high school students read 32.3 books a year. 14% of adults read e-books. As literature had become important in the Korean market, the government has promoted policies and support to maintain the sustainable growth of the Korean publishing industry. He concluded that there has been high interest on UK literature in Korea and hopes that the UK market will be interested in both Korean culture and literature.

With the support from KPA and LTI of Korea since 2008, there has been various areas of copyright transactions are taken in to consideration. At the same time, there has been a lot of Korean titles that are exported to other countries. However, due to the financial crisis between 2008 and 2012, it affected the publication industry including Korea which led to a continuous drop of exported translated titles. She also addressed that Philosophy and Technology, such as Walter Isaacson’s Steve Jobs biography, are one of the popular translated titles during that time.

In the mid 2000s, when the Korean Wave start to spread across the globe, 4,400 titles Korean literature were translated into different languages from 2009 to 2012. They have exported titles to China, Thailand, Taiwan, Japan, and Indonesia followed by America, France, Italy, and Russia. Quite a small number of titles were available in South America and Middle Eastern countries. The Korean titles which are popular, based on genre, are education (including manhwa format), business, and self-development books, such as Youth, It Hurts  which 60,000 copies were sold in China.

The speaker covered the areas which were stated from the very beginning of the talk. However, there is more focus on education that encourages young readers to read. She explained that, in order to establish the e-book market, resources and suppliers are required. Furthermore, the content should be in forms of entertainment and leisure that attract the readers including the younger generation. Currently, the main market is school reference books. Therefore, the content of literature should be design appropriately to the demands of Korean market. The publishing industries should also relate to the government policies, based on regulatory system, that provides support to both the publishing industries and literature.

Apart from the bad translation through the headphones, I briefly understood how the Korean publishing market works in supporting not only the global literature in entering into the Korean market but also how to increase the Korean literatures’ awareness in both local and global market. Also, there are some concerns on whether Korean publishing market should take technology in going to the next level of presenting the content of Korean literature in e-book formats: print versus electronic formats. Education is mostly important among the readers including elementary, primary, and high school students. There is a lot going on to understand the Korean market but also looking into their own internal resources and capabilities in implementing their strategies while having the support from the government. Many internal and external factors need to be considered in order to expand Korean literature, including translated titles, both local and global markets. Korean publishing industries still have a long way to go but, certainly, even though Korean literature is just the beginning to be in the global stage.

Source: Booklet for “An Overview of the Korean Publishing Market”