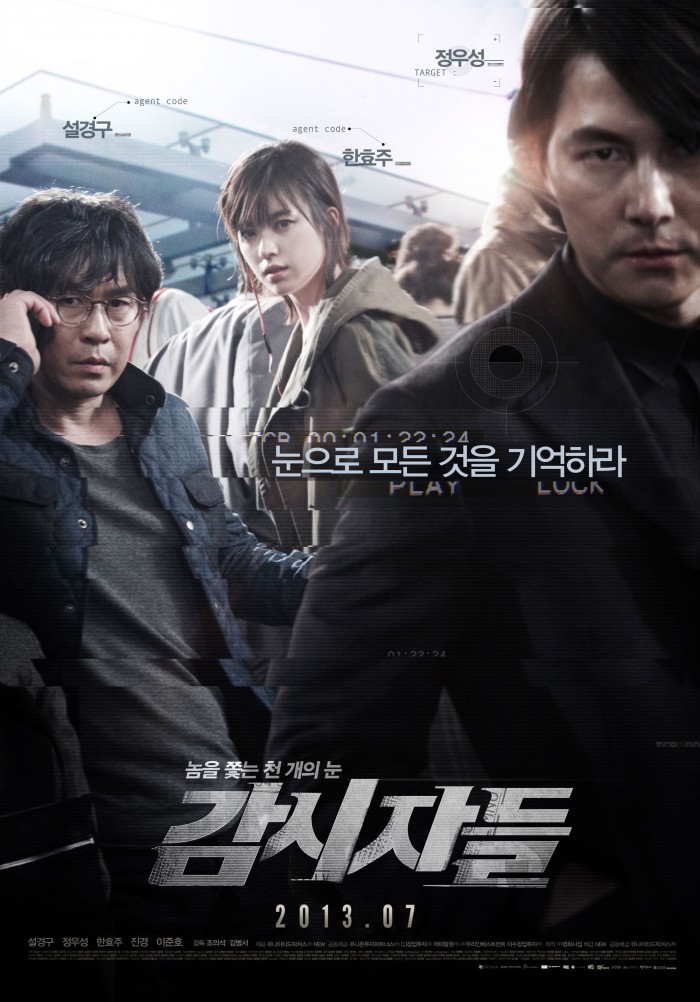 Detective Hwang (Sol Kyung Gu) leads the secret surveillance team in the police department. Their team’s goal is to catch the group, including the leader, who is behind the robbing cases. Yoon Joo (Han Hyo Joo), who is specialized in observation skills and memorization, joins the team after passing Detective Hwang’s test. On the other hand, James (Jung Woo Sung), the leader of the group, overlooks and plans out the robbing cases from the rooftop of nearby buildings. He directs his orders to his members while he doesn’t accept any mistakes. While Detective Hwang’s team trying to put the pieces together to catch the criminal group, James is given orders by his mentor (Kim Byung Ok) to complete the missions.

It was enjoyable to watch Cold Eyes as the location is like a game of chess: a battle between criminal group and secret surveillance team. It might take some time for audiences to think how the teams are on the move. Each of them have their own strategy how they aim for certain goals while running on a wild goose chase. With Detective Hwang’s personal animal strategy platform, he places his wooden animal pieces in position while directing his teammates on where should they go next. On the other hand, James uses radio communication and binoculars to overlook the scenes while directing his orders to his comrades through mobile phones.  Every thing is in motion while the tension rise in chasing and escaping from specific locations. It can be confusing during the conversations among the members, such as their secret codes and names, but showing some certain aspects of their strategies might shed a light of understanding.

The main casts (Sol Kyung Gu, Han Hyo Joo, and Jung Woo Sung) played their roles for the first time in Cold Eyes, a action-crime-thriller film. They portrayed the characters who are on the move and evoking intense emotions. Han Hyo Joo has played a huge role as Yoon Joo which I am really impressed with her. At times, she is serious about being a secret cop in the team. At other times, she conveys her sad emotions as she cares about the teammates. She is able to play out her actions and emotions simultaneously at certain scenes which don’t disappoint the audiences. Sol Kyung Gu had, yet again, done well in being the Detective who is like a leader and a father to the team. Since he started to play older roles, such as a father in Hope (Wish), he understood where he stands and how he should portrayed. He has developed well in being on the move in action films like Cold Eyes while keeping his usual jovial and heartfelt gestures. Although Jung Woo Sung acts as a bad guy for the first time, he maintains his evil and charming facial expressions while showing his suave killing moves in either harsh or silent way. He tried to be James as evil as possible but I felt that his expressions while he said his lines wasn’t strong enough. I hope he could do even better if he is given another bad buy role in his next film.

The action and cinematography was done well during the game of chess on chasing and escaping between teams. The scenes were not too lengthy as these keep the audiences focused on what are their next moves. There were a bit of cliches on the second half of film which led the audiences wonder why the team including Yoon Joo haven’t thought of it from the very beginning. Yet, I think that’s how the script was written to add in the climax as this is not the end for the surveillance team in giving up on catching the criminal group. There were a few gaps in between such as thoughts about James. The question is how James end up being the leader of the criminal group even though his mentor has said that James has nowhere to go. Why James want to be the bad guy? It is difficult to understand why on earth James is involved in crimes.

Cold Eyes will keep you focus on how each team worked out in the game of chess with pieces and strategies. One move could lead to either good or bad. The casts, for their first time playing their roles in this film, have done well in portraying characters with fast-paced actions, steady emotions, and catchy dialogues. The only problem is the missing gap: Jame’s side story. Cold Eyes made me feel so excited while thinking about what are going to do next. Although there might not going to be a sequel to this film, I hope that it could turn into a drama series which we might get hooked up with it.