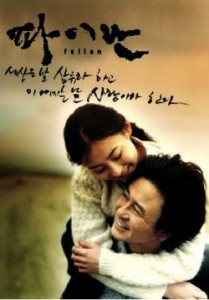 Kang Jae (Choi Min Sik) mostly hangs around at the neighbourhood electronic game room. His old friend became the boss of a crime organization while Kang Jae does contribution for the organization by running a small video shop. Even though his fighting skills are bad, he sells porn videos to teenage delinquents. Suddenly, he is forced to sign a life-risking contract with the boss of the major gang but he believes that it would help him to return home safely. Then, unexpectedly, he receives a letter from his lover, Fai Lan (Cecilia Cheung) whom he used to be with her in a fake marriage. He finds that she has passed away. So, he goes back to the place where he meets his lover. Here, starts the story between the married couple who have never met before and go through their daily lives.

At the beginning, I thought would be mostly focusing on gangsters but it turn out to be drama and romance. There is a lot of character development for Kang Jae and Fai Lan. Fai Lan tries to stay still in Korea through a marriage but never meet Kang Jae before. At the same time, she’s dying due to an illness. On the other hand, Kang Jae tries to be the senior in the gangster clan but he’s actually a total loser with an uncomfortable life. Fai Lan wants to see him and misses him so much. Once Kang Jae read the letter, he starts to have feelings for her even though she’s already dead. There is a lot of focus between the main character’s situation until they meet and realize the meaning of love.

I love the concept of this storyline. The married couple never saw each other before.  Two of them want to see each other and be together. To me, this is something different. Fai Lan wants to be with him and thankful that she is able to stay in Korea. Kang Jae feels sorry for Fai Lan who’s going through hard times. The storyline itself is clear and humble.

The only problem that I had is Cecilia Cheung speaking two languages (Mandarin and Cantonese) in this film. I don’t why does she has to say two languages in the first place. It’s either she proofs that she does well in speaking these languages or because of her fluency in Mandarin that she can’t follow up with the script. In my opinion, she might as well stick to saying one language, which is Cantonese, that she will be okay with it. Since Fai Lan is from China, why does she need to speak in Cantonese? Unless Fai Lan is from GuangZhou, Chine, then that’s acceptable. I believe that she should just stick to saying one Chinese dialect in this film.

The overall storyline and characters are calm and steady. It reflects two people who never met each other during the marriage life. It focuses on the main characters’ situations in life. Yet, Cecilia Cheung should just speak either Mandarin or Cantonese.