Have a ‘Reality Check’ 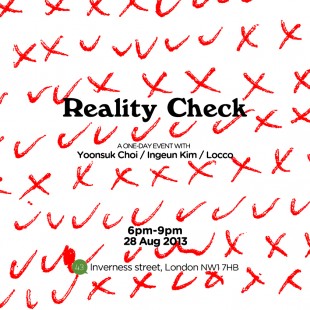 ‘Reality Check’ was held for just one day at the 43, Inverness Street, London. Sound, performance, and installation of the artworks are created by Choi Yoon Suk, Kim In Geun, and Locco. ‘Reality Check’ means how the reality actually happened and not how we perceive it. The three artworks of ‘Reality Check’ question our perception of reality. The artists use various methods on how we know about the world around us by showing certain things that we expose through our own eyes and ears. 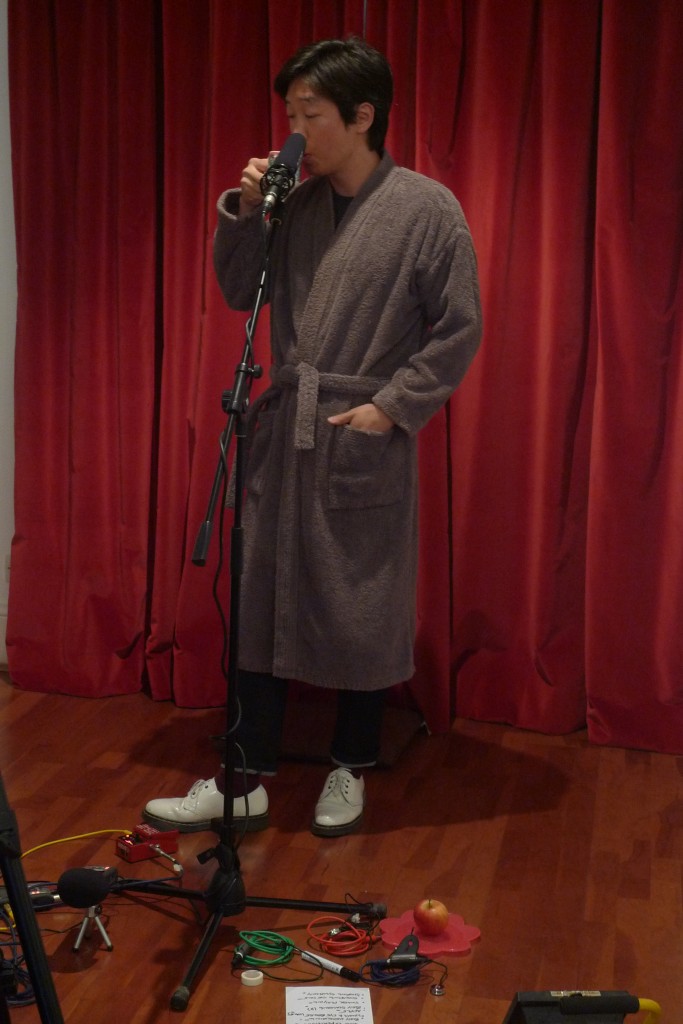 Choi Yoon Suk gathers all the sound from various actions with a Loop station. Loop station is a sound looping device that records the sound and repeats the recording sound. With the device, he creates a combination of various sounds which is like an instrumental music. The combination with familiar sounds and words intrigue the audiences’ curiosity. It was interesting to see how the sounds, which he made, are related to the audiences’ daily lives. For example, when he used the teacup, he makes various sounds that is recorded and combined together into one music piece. This piece signifies their collective experience.

He also did another social performance by putting on the headtouch and talking to people. While talking to people, he was fidgeting with his fingers. At first, I thought that maybe he was preparing to go on stage. Instead, he walked around the gallery and talked to people as part of his artwork performance. 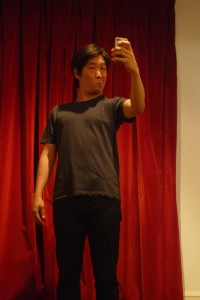 Choi Yoon Suk also did a combination of how selcas are made through smartphones. He did the wink pose, funny cheeks pose, loosen himself up before posing, and many other poses. I find it funny but true as many of us try our best to make the best pose for selcas. 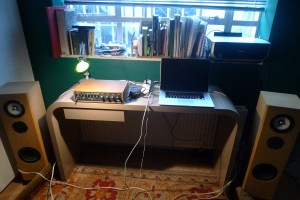 Setting for the sound presentation

Kim In Geun takes on the fabrication of habitual and familiar noise in post-sound production. The recordings focus on the ambiguous, uncanny, and illusionary aspects of sonic experiences that he finds in his surroundings. He has recorded sounds from various objects, such as whirling fan and rubbing the fabric. Then, the collected recordings are transformed through post-production by editing the sounds that are associated with his experiences.

As I entered the room, I heard the sound of the dog’s deep growl. It gave me quite a surprised as I thought that there was a dog in the room. Have a listen at the excerpt of the sound of the dog growl’s which relates to Kim In Geun’s experience in the park. You can also listen to other sound recordings that he has edited.

A collection of sounds from various objects which are used produce another type of sound. Kim In Geun really has the capability into editing from various sound of objects to a sound from a single object. 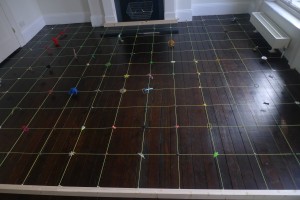 Locco presents both installation canvas and video footage about the collection of abandoned objects. He walked from his studio/home in Southward to 43, Inverness Street. While walking along his journey, he collected abandoned objects on the street. These collected items are assembled at the gallery. This is done by connecting the pieces together with colourful strings in square symmetrical lines. The shopping basket, which is used to store the collected objects, is placed in the room. 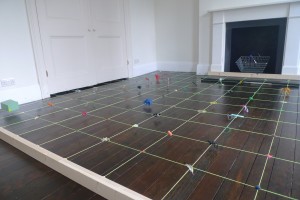 After seeing both installation and video footage, I realize that every single object, even abandoned ones, can be created into one admirable piece like ‘The Abstract Journey’. As I look closely to the installation, I can see that every single item is connected together. An item is tied to another item from four sides. Then, when I looked at the installation as a whole, I realized that in reality, we had seen abandoned items on the floor. Even the little things, like strip of paper, cigarette butt, pigeon’s feather and others can be spotted on the streets especially in London. I would say that the meaning behind this artwork is that on a journey, from one destination to another destination, we spotted objects that we either care or not.

Three different artworks reflect on how the audiences’ sight and hearing is used within our surroundings. Also, I think it sparks the audiences’ perception about how the reality is. These artworks intrigue the audiences’ curiosity and realised that is how reality happens within their lives. There is a saying that ‘a picture worth a thousand words’. That quote definitely relates to these artworks as they present the aspects of reality through different forms. We are definitely looking forward to their upcoming artworks from Choi Yoon Suk, Kim In Geun, and Locco in the near future.