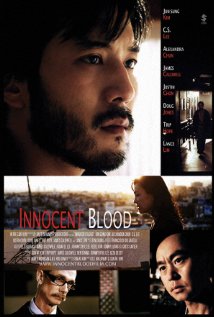 James Park (Kim Jun Seong) retired from the detective work and works as a lecturer in the university. One day, his only son, Cody is kidnapped by an anonymous criminal (Lee C.S.). This criminal asks James to look back into the past case that he had handled before during his detective days. While he explores the past, he has gone through many hurdles: continuous murders, loses his wife’s trusts, and the current detectives are working on the case which is linked to James. He has to figure the mysterious past as soon as possible so that he could save his son.

“Innocent Blood” has a storyline that is quite middle tone. What I mean by middle tone is that I find that the storyline did not catch my attention immediately. I felt that there was something missing in the storyline. I wouldn’t consider this as a thriller besides the criminal who plan out the murders to trouble James. It didn’t have much suspense in the film.

However, my mind was totally focused on the mystery. I like the fact that James looks into the past that links to the criminal. As the film goes on, the storyline starts to evoke with interesting truths. The film takes me through the storyline about why James’s son was kidnap till the actual truth. Although the film is in a slight slow pace, but truly understanding the mystery storyline is a treat. 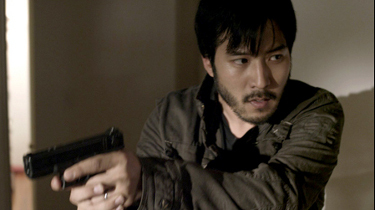 Also, I am amazed with some characters that evoke emotions that made my mind go wild. For Kim Jun Seong, who acted as James in this film, not only he does well on being an action man, but he has a sensitive side in portraying James in two roles: a serious detective and a caring family man. At the same time, James has to tackle with choices and strategies that he made. One small error will caused him even more trouble. Yet, he takes one step at a time in thinking before he makes his move. At the end of the film, Kim Jun Seong has made a scene which made me cry in tears. On the other hand, Lee C.S. has done a good job in acting as a psycho criminal to fulfil his own needs. He definitely made me cringe when he has gone crazy at certain situations.

In this film, I would say that the main character has to find the right key to unlock the mysterious past. It’s like a game of chess. Although there was not much intense thriller, the mystery storyline makes the audience want to find out more the reason why does a psycho criminal specifically want to kidnap James’s only son. Why the criminal made James’ and his wife’s lives harder? The cinematography is well-made with dark suspense scenes and showing a few areas of Korea town. This film is quite good in terms of storyline, characters, and filmmaking but I feel that something is definitely missing. It’s a great collaboration between two directors, with different backgrounds, who are able to pull this off.

If you are into mystery film, then I would recommend this. However, you need to have patience like James. There is the beginning and the end has a connection which you will have to find out. Also, you will find out why I cried at the ending of the film.