Interpretation of Images through “Mindscape” 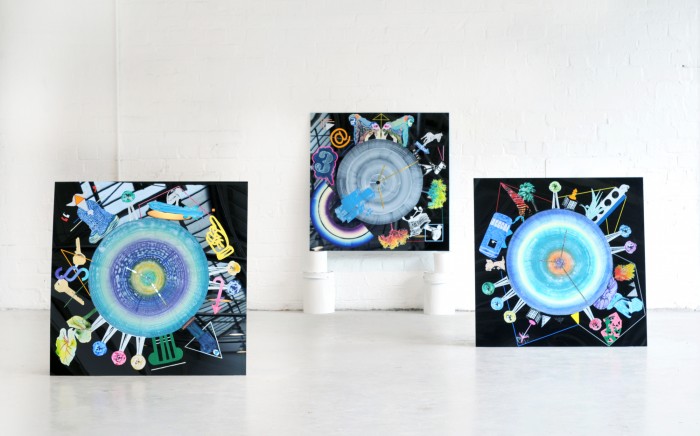 Luna Jungeun Lee, born in Seoul, received her BFA in Fine Art at Kook Min University, Seoul (2009), followed by a Masters in Fine Art at Goldsmiths College, London (2011). Her work was selected for the Clifford Chance Post-Graduate Printmaking Prize (2011) which later became the People’s Choice Winner of the Shape Open Art Prize in 2012. She did the Artists Residency in Glasgow between 2012 and 2013. Her works has been exhibited in China, Germany, and throughout UK. 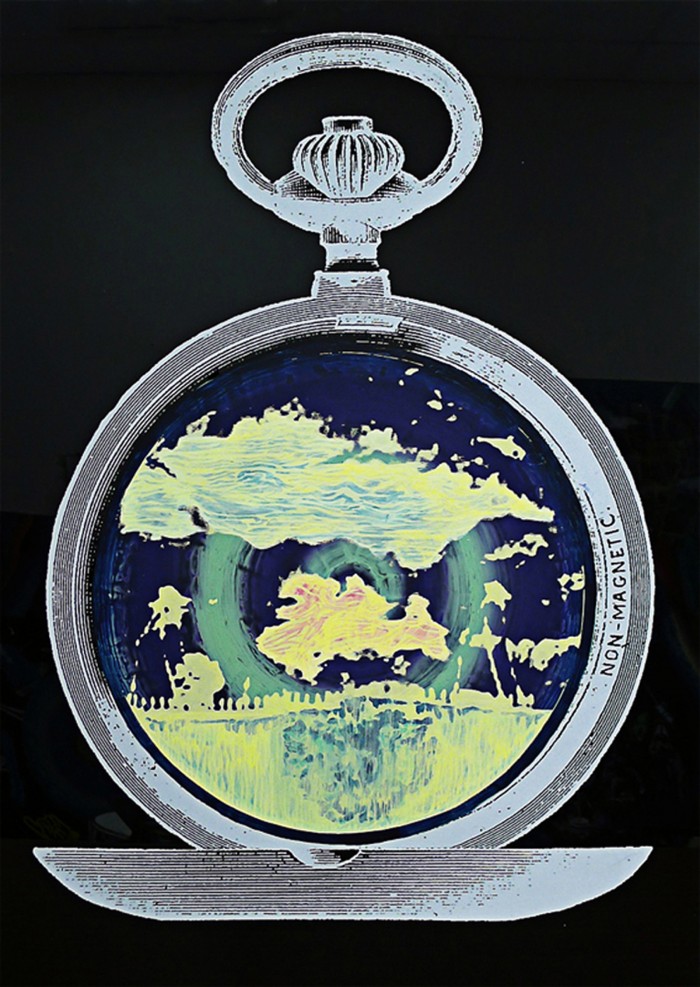 Recently, she had her solo exhibition, Mindscape, at the Muse Gallery London. Her pieces focus on how the random images can be perceived and identified in the changing world and reflections of existence in everyday life. She had created her art pieces for the exhibition within eight to ten months: from finding images, to printing on perspex, and painting on the printed perspex. She brings the images to live through physical medium that enable each viewer to perceive their vision about the world and society. 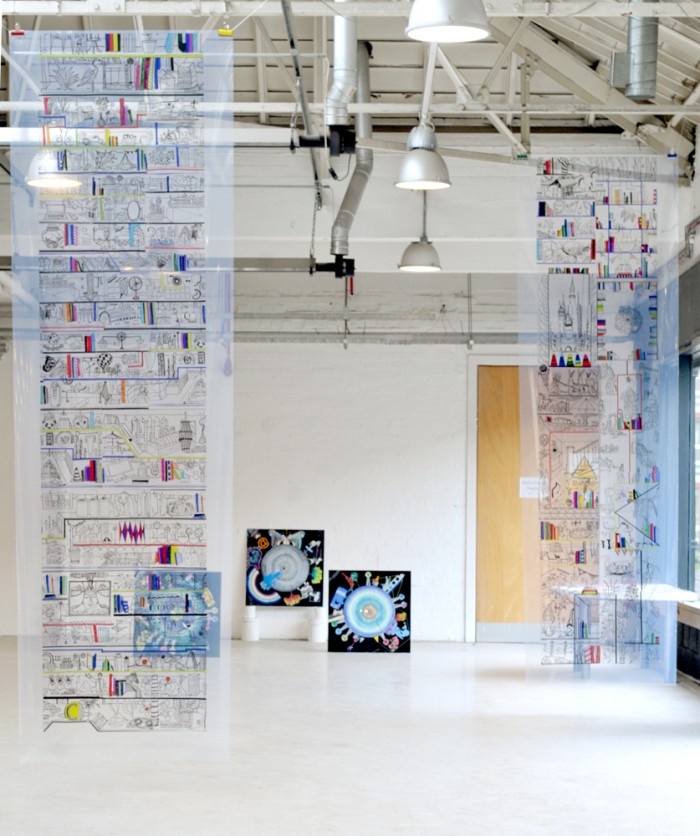 Before placing the images on perspex, she had sketch her drawings on the sketchbook which consists of images that she want to interpret them. Most of her drawings from the sketchbook come to life through showcasing installations and physical mediums which have multiple layers of colours and images. 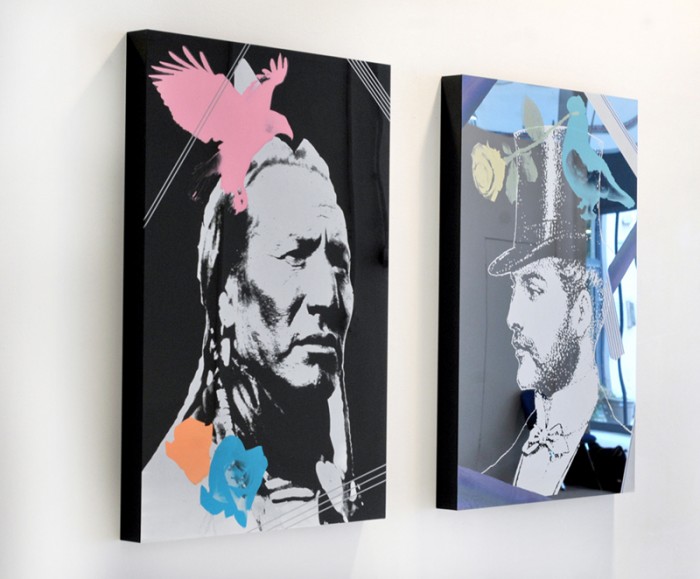 Every single artwork represents how we perceive and question about the changes in the society such as how the modern technology existed as time goes by or some people might have forgotten the well-known icons that is not exist in the modern society. For example, The Last Indian and The Last British Gentleman give clear examples on showing the past iconic images that almost lost it existence due to the contemporary world. She made these iconic images more lively by putting other similar images with bright colours which bring the viewers’ attention to them. 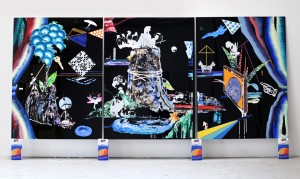 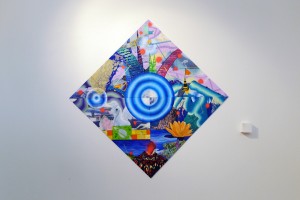 Her printed random images on the artwork follow by brightening things up with colours. While looking at these images, I felt as if I was watching the 1950s television whereby there is a black screen with various rainbow colours that make the images more lively. Art pieces like Ephermal Dreams, Olympia, and The Lost World compliment well with our interpretation with icons and objects that blend in or go against the ongoing modern technology in society. The viewers and the artist herself might also question about how we consumed with everyday objects. These art pieces draw the viewers’ attention in being in different worlds or landscapes of imagination or reality such as The Lost World which you have the choice on whether we want nature or technology. Also, whether we do not want to lose those memorable images within the every single century. 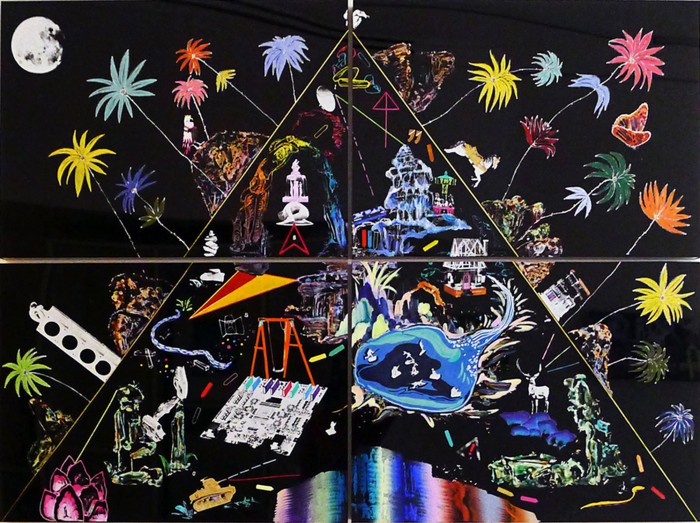 Not only she combines the different images that have different binaries, but she also create an artwork that truly signifies the hopes of peace and harmony. That is the DMZ. The DMZ is a border between North Korea and South Korea. Some of the images represent either from these countries with huge differences such as the nuclear weapons, nature, and buildings. However, when looking at the big tree in the middle of the art piece, the artist and the rest of the world hope that there is a unification between North Korea and South Korea. It truly represents a hope for peace and harmony among two different countries.

Luna has bring the random or common images to live with bright colours on perspex and other forms of physical medium. She put in a lot of effort and time to organize how these images can influence the viewers to give different perceptions and have realisations within the mindscape. She has put into lots of detail on each work that are associate the theme on ongoing changes of society, including modern technology, and the existence of icons and objects in the modern society. When I walked into the exhibition, my eyes were brighten up and was truly amazed with her art pieces. I have several questions in my head: (1) Where the past objects have gone to? and (2) How the past and present objects can compliment each other in the society. She has brought up the past and present images through the mindscape where we can enter into these worlds. With bright colours on random images, Luna brought our attention to how, personally, we think the world and society go around as every single second passes by.

This Thursday, Friday, and weekend (24 – 27 October) is the last portion of days for you to visit her solo exhibition at the Muse Gallery, London. Don’t miss out on her lively perspex installation images that will give you the opportunity to interpret in association with society and existence. You can also visit her website to see her previous works of art and installations.