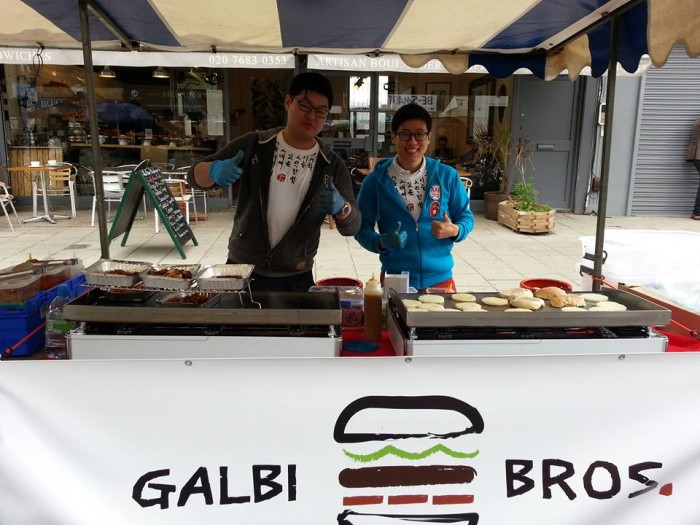 Some of you may have watched the parody of “Gangnam Style”, “London Style”. But, we are not talking about PSY. We are talking about The Galbi. Bros. Moses and Hanbit met each other through making the parody video and decided to start their own Korean street food business, The Galbi. Bros. The Galbi. Bros are known for their burgers with catchy names like The Invincible Admiral Yi, Ramen Burger, Don Burger, and many more. They have been around London including the major food festivals like the Urban Food Fest.

Check out my review for the Invincible Admiral Yi burger that I had last Christmas at Devonshire Square. Ever since they put Ramen Burger (available at the Urban Food Fest, Shoreditch) into the menu, these burgers are sold out immediately within a few hours. I haven’t even tried the Ramen Burger yet as they were sold out quickly. There is always a long queue in front of the Galbi. Bros stall. It is because the burgers are awesome-ly delicious and mouth-watering that you might want another one.

I got the chance to speak with Hanbit, one of the co-founders of the Galbi. Bros, who talked about their business, Korean street food and pop-up restaurant, and thoughts about the rise of Korean food. 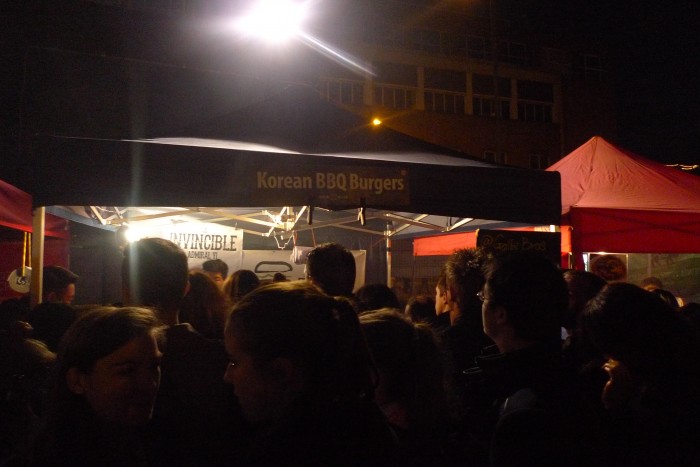 How did you and Moses meet and set up the Galbi Bros.?

It’s a funny story. We met each other through filming “Gangnam Style” parody. Moses was the producer and editor of the video. I starred in the video. That’s how we met. After filming the video, we talked about what project to do next. We made the “Gentleman” parody and another “Gangnam Style” parody. So, in total, we made three videos. Then, we thought about what to do for our fourth project. We suggested doing a cooking channel but we wanted to do something bigger than that. That’s how the Korean street food concept came into being and that’s how Galbi Bros. was born.

Why did you decide to set up Galbi Bros.?

In general, food is one of the best ways to promote culture and in our case, Korean culture. We knew that it would be a smooth and easy way to bring cool Korean food to London and above all, we both love food in general. 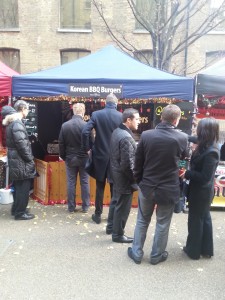 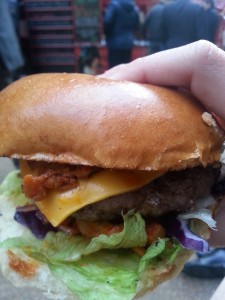 What is unique about the burgers in Galbi Bros. where you have the well-known Ramen Burger and The Invincible Admiral Yi?

Our burgers are unique in the sense that almost everything is homemade. We refuse to buy off the shelf marinade and just pour it onto the meat. We make the marinade ourselves and really pour every effort into the process as it’s this extra effort that makes the difference in the taste. We successfully rolled out the Ramen burger last year and it was a massive hit at the Urban Food Fest – we were one of the first in London to serve Ramen burgers. The Invincible Admiral Yi is the only one of its kind where we bring the Korean spicy pork and galbi beef together into a single burger – hence the name “invincible”. It really brings all the Korean flavours together and it has been our flagship burger since last year.

You did the pop-up restaurants at the Dead Dolls House, twice. How was it preparing the meals at the in-location? Are there any plans of doing this again in the near future?

It’s very different. In a street setting, we are not as constrained as in a pop-up setting (apart from the lunch markets). In a restaurant setting, especially with a three course meal, the main course needs to arrive after you finish your appetiser in a seamless manner. It’s this chain of food preparation which is vastly different.

From an operational point of view, we found it challenging to work in a small kitchen as opposed to a street food setting, where we have a 3m x 3m stall which gives plenty of space to move around. We have plans to continue to have pop-up restaurants once every six months or so. We don’t try to do it too often as it then loses the novelty value. 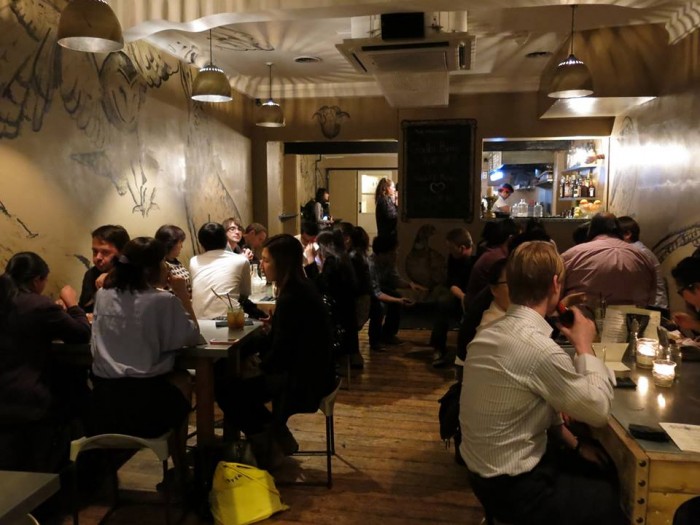 How was it like being in the street food scene in London?

Street food in the end is a business. Just like any business, we had to think about how we could effectively serve our customers. For example, at Urban Food Fest, the crowd composition was such that most are the light hearted and fun Shoreditch people. They like to enjoy the scene, communicate, give feedback about the food, and they don’t mind waiting in the queue. We love talking to people as communication helps us to improve our food and image. In contrast, trading at Devonshire Square is a lot different. It’s a busy city area where we have to serve food a lot of food in a short amount of time because all our customers are hard-working bankers.

So far, you have the standard menu that pulls into wanting more of the burgers including ‘The Invincible Admiral Yi’. Do you have any plans of adding something to the menu?

Definitely, yes. We really want to push our Don fries. So far, we have only served fries in pop-up restaurants and not in the street food scene as this required an extra set up. However, our customers have absolutely loved our Don fries at our pop-ups and we really feel the urge to launch this at our street food stall. People say that our Don fries are phenomenal in that the fries, gochujang, cheese, and kimchi go really well together. The spicy kick from the gochujang goes nicely with the greasy potato fries. It really works. 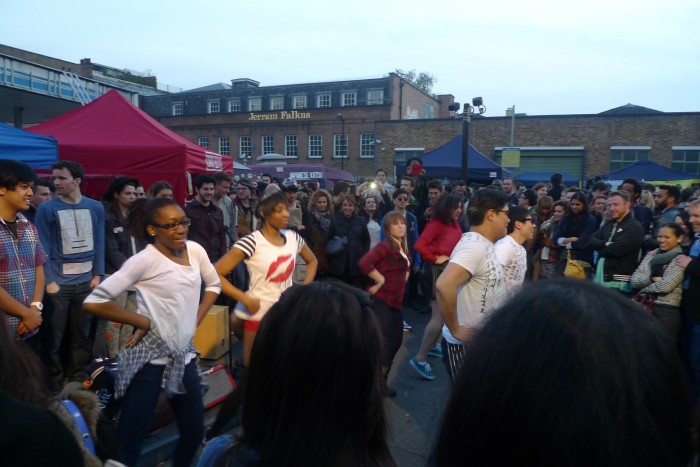 Their performance for the Korean Food Night at Urban Food Fest

You previously said about involving in filmmaking together with Moses. Do you think music and video are the way to, not only to promote food, but also the way to showcase your various talents through social media?

The biggest edge that we have is video production. It helps to promote our stuff. We haven’t really done much yet because we have been tied up with trading. Although, we haven’t been completely off the video production scene as Moses recently made a video called “The Kitchen Band” which involved some CG effects! Moses is absolutely amazing at making videos. Videos do set us apart and definitely engraves our image as not just an average street food trader.

Just UK alone, Korean food has become so popular in the past years. Street food scene literally shows that. Few years ago, there was only Kimchi Cult. Now, we’ve got us, Kimchi Cult, Kimchinary, Busan BBQ, KORRITO, Yogiyo!, and Choi Boys. That’s seven Korean street food traders in the UK. It shows that street food scene in London is buzzing with Korean elements. My view is that there will be more Korean street food traders and restaurants, not just in London, but spread across the whole country. The press will continue to cover Korean food as it has done recently. In five years time, I would expect more high-end restaurants adopting Korean elements in their menu.

We are planning to continue trading at our core markets at Urban Food Fest, Devonshire Square, and Tower 42. We are going to be involved in major food festivals as well. We will also find one or two markets where we can effectively promote our image and Korean food.

To you, what is Korean food?

Korean food is my identity. It’s everything that defines me as a Korean.

Thanks to the Galbi. Bros for taking the time to participate in the interview.