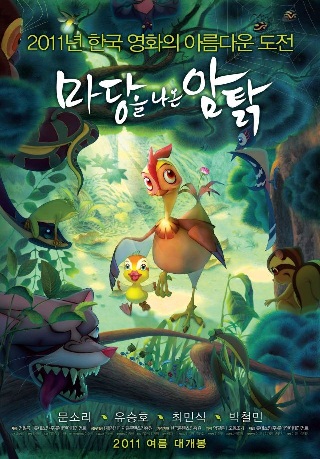 Leafie (Moon Soo Ri), the hen, is caged up in the barn to produce eggs. She dreams of having the freedom to walk around the farmyard. Also, she want to lay her eggs and raise them as her children. So, she decided to starve herself and pretend that she can’t produce eggs. The farmer finds her so weak that he dumped her into the pit. She gets out of the pit but, suddenly, she meets the one-eyed weasel. Luckily, the mallard drifter (Choi Min Sik) comes to the rescue. With the mallard drifter’s and Dal Soo’s (Park Cheol Min) support, Leafie is able to live her life freely. One day, she finds a duck egg at the nest and decides to incubate the egg. Meanwhile, the mallard drifter dies while protecting Leafie and the duck egg from the one-eyed weasel. Then, the egg hatches and Leafie finds the baby duck. She takes the baby duck as her own child who thinks Leafie is the mother. The film is based on a popular children short novel which is written by Hwang Sun Mi.

The elements of the storyline between film and short story are quite similar. Yet, only there are additional parts in the middle of animation. It is understandable to place how we perceive the storyline through different forms of media content. The film is made more entertaining especially with the voices of each animal including Dal Soo. In this animation, Cho Rok’s side story, about trying to fit in to become the duck and join the clan (eg. the duck race), is focused a lot.

The voice casts include well-known actors like Moon Soo Ri and Choi Min Sik who brings a lot of animated excitement into the film. They portray with voices with humour and emotion. It is better to watch to the original one with subtitles rather than watching the dubbed version. Out of all the voice casts, Moon Soo Ri is the star who portrays the Leafie with an all-round personality, from innocent and kind hearted to strong emotive feelings. While listening to her voice, I can see that Moon Soo Ri was so into with Leafie. I am sure she had lots of fun in portraying this character. 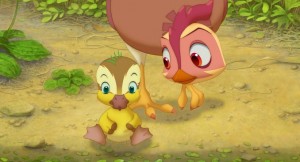 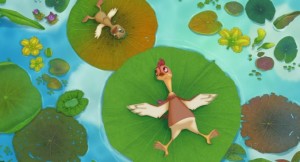 The main point is ‘motherhood’. Despite the differences between Leafie and Cho Rok, she does her upmost best to raise him like her own child. Its theme is universal that touches the audiences’ heart. I cried even more when Leafie and Cho Rok have emotional moments of separating each other for their own good. Leafie’s effort as a mother to Cho Rok brings out plenty of memories cause the tears, including happy ones, to come out from my eyes. The words can’t be described a lot because their facial expressions and actions speak louder.

Both animation and character design are wonderful. I was impressed with the surroundings in farm and countryside which has the mix of traditional elements from Korean paintings and modern technology. They are like paintings that you want to framed them up on the wall. A lot of work has been made with the use of hand-drawn and CGI effects that make the whole animation amazing. 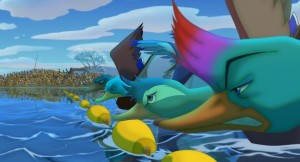 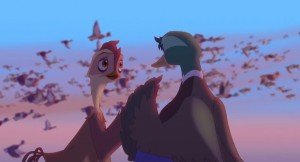 Leafie, a Hen Into the Wild is a must-see animation film to watch. It has amazing animation and character design. The voice portrayals from well-known casts are clear and engaging. Director Oh has focus a lot in making the film entertaining and emotional by presenting and adding elements in the storyline. Still, with ‘motherhood’ and fictional animals like Leafie, it moves the audiences’ heart.