The mother (Lee Eun Woo) is angry as the father (Cho Jae Hyun) is having an affair with another woman (Lee Eun Woo) who works at the convenience store. The son (Seo Young Ju) looks on at his parents’ violent fight. One night, the mother takes the knife to seek revenge on the father but failed. Thus, she decides to go to her son’s room which causes the son to go through anger, humiliation, and crave for curiosity and satisfaction as being a ‘man’. Meanwhile, the father feels guilty of what he has done and try his upmost best in supporting his son.

The first Kim Ki Duk’s film that I watched is Pieta which is heartbreaking. For Moebius, it’s more traumatising and shocking than the previous one and, out of all Kim Ki Duk’s films, this is one of the most shockable films that I have ever watched. At times, I, literally, just feel frustrated and threw my earphones at the corner. Yet, I still managed to watch the whole film. Moebius consists of no dialogue at all. There is an old saying that action speaks louder than words. Kim Ki Duk proves it through films that not every film need dialogue as audiences could tell how the characters are portrayed in difficult situations just by reading their facial expressions and actions. So, there is no lost in translation between Moebius and both Korean and international audiences.

Kim Ki Duk has, yet again, takes on the challenge in portraying controversial topics through his films that needs to be expressed and known to the audiences. He takes men as the subject who have their own weaknesses in ‘manhood’. After the mother took her son’s manhood away, the son felt so much humiliation of how he’s going to get through with it. He has been going through the pain and suffering, such as being bullied by other guys, that made him mentally and physically frustrated about his acceptance of identity. At the same time, he has to go through the painful tactics, like rubbing a rough surface stone against his skin, to fulfil his sexual satisfactions and pleasures. 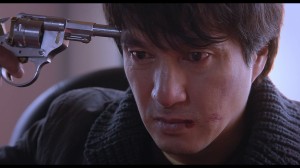 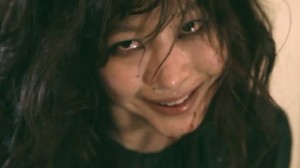 On the other hand, you have three family members who are going against each other on the twisted jealousy for manhood and sexual pleasures. The father understands how the son feels when he lost his manhood that he finds ways to cure the son’s suffering. Yet, the mother, who came back from the unknown journey, seeks sexual satisfaction which causes the whole household uproar. The whole scenario in the house become so twisted that the son is shocked to see their parents’ cruel actions. It’s a continuous mental battle that they have to go through just to seek their own satisfactions but lead to terrifying destruction in the family.

As the film was done within a week, the casts had done well in portraying the characters that blow my mind away even the most traumatising scenes which I couldn’t believe that are willing to take the challenge in doing those actions in Moebius. All of them had done well in acting without the dialogue while conveying so much anger and sadness through their actions and facial expressions. Cho Jae Hyun puts himself as husband, father, and man with the right balance while being in total mental confusion. Lee Eun Woo, who acted as the mother and the mistress, is able to make me feel so frustrated of what these two characters have done to the men in the whirlpool of madness. I was surprised that Seo Young Ju is at his teens and acted in Moebius. His acting as the son, who is the main victim, had made me lost for words. Even at a young age, he is able to show how the son have to go through the ups and downs during the lost of ‘manhood’. He has done a splendid performance in Moebius. Although some scenes were scary, he is willing to challenge himself in acting out these scenes. I could see that he has a lot of potential in acting and he will be a great actor throughout his career. 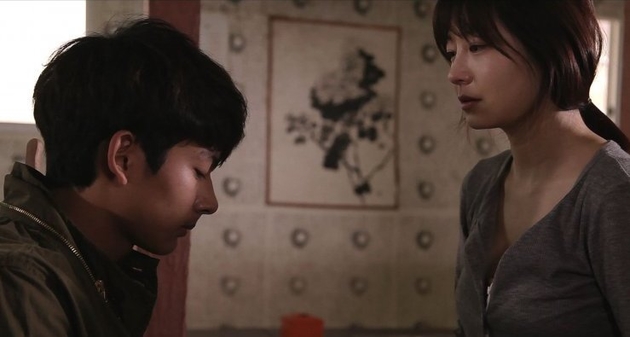 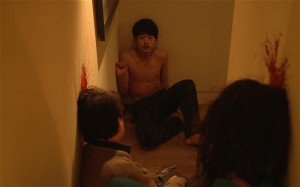 The young and rising actor, Seo Young Ju, acts as the son while Lee Eun Woo also acts as the mistress in Moebius

Overall, I find Moebius so shocking even though I have survived in watching the whole film. There were so much twists of traumatising scenes that made me feel so frustrated but also heartbreaking to see how men have go through the doubts of losing their manhood. As I said before, Kim Ki Duk is brave enough to portray concept that is outside the circle of societal issues that needs to be known to the audiences. The casts did an amazing job in shaking the audiences’ mind in terror. My advice is that you have to be brave enough to watch very controversial films like Moebius. Seriously, literally, you have to be brave to watch the whole film even when the visual and emotional scenes could pierce into your heart, mind, and soul.