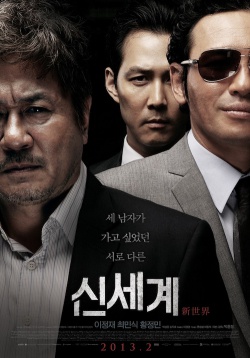 Police officer Ja Sung (Lee Jung Jae) is selected to go undercover in the gangster organisation “Goldmoon”. He became Jung Chang’s (Hwang Jung Min) right hand man. Unexpectedly, the leader of “Goldmoon” was killed in a car accident. Both Jung Hang and Lee Joong Goo (Park Seong Woong) go against each other to become the successor of “Goldmoon”. Meanwhile, Kang Hyung Chul (Choi Min Sik) is in charge of the “New World” operation including asking Ja Sung to be the spy in the “Goldmoon”. While Jung Chang is away in China for business, Hyung Chul speaks privately with Ja Sung. At the same time, Jung Chang has suspicion that he ordered his men to find out any information related to Hyung Chul. As for Ja Sung, he is promised to return to the police force after the leader of “Goldmoon” is dead. However, Hyung Chul still wants Ja Sung to continue to be involved in the “New World” operation. Ja Sung is in a complete game of chess who is being controlled by Hyung Chul. This also affect his loyalty and friendship to Jung Chang.

This film revolves around the characters who are in the game of chess. I considered “New World” as a different battle field among the characters, cops and gangsters. Every leader of the clan go against each other to get to be the successor of “Goldmoon”. They play with evil tricks by either using their own men to fight against each other or using manipulative tactics to frame the person. While they are battling against each other, Hyung Chul is the mastermind to forsee the battle and hoping that they would either go to prison or die. He also controls his knight, Ja Sung, by ordering him to do what he thinks best. Later in the battle, a few hidden characters just came out of nowhere which make the whole game topsy-turvy. They are in the “New World” where it is similar to the Roman Colosseum where the great titans fight against each other until one of them dies. 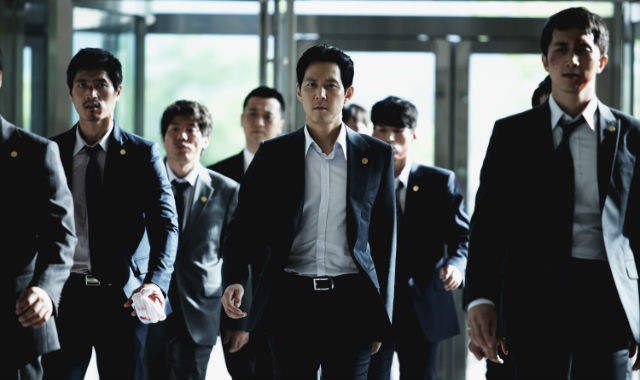 Ja Sung and his entourage

Ja Sung is completely mentally disturbed in the case of identity. He has lost himself whether he is a cop or a gangster while he is a spy in “Goldmoon”. He thought that he could return to his normal life as a police officer but he has to continue to be in “Goldmoon” because of Hyung Chul’s control. He worries that he might get caught and killed by the organisation. Later, when he finds out that his comrades are caught and killed by Jung Chang, he starts to sweat and shake which signifies him worried that his whole identity will be revealed. Still, in order to survive in “Goldmoon”, he has to make his own decision of who he is. Ja Sung is going through the hardcore mission while being confused of who he really is. 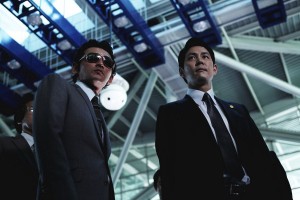 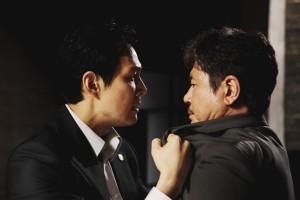 Besides the battle among men, Park Hoon Jung has also emphasises on the camera angle and positioning on fighting scenes and close focus on the characters’ facial expressions. The most captivating scene of New World is when Jung Chang is fighting with Joong Goo’s men in the elevator. They stabbed each other with knifes and the whole place is a mess with bodies full of blood as the scene is filmed upwards. Another example is when their scary and/or bloody facial expressions are shown by using close-up camera focus. Such examples of the use of camera angle and positioning made me feel tense while I was almost moving towards the edge of my seat and cringing at the same time. Although these scenes were shocking, I was amazed of how these scenes are focus with tension and excitement. 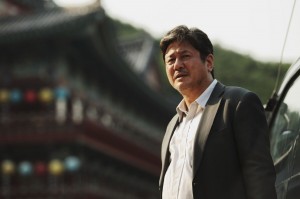 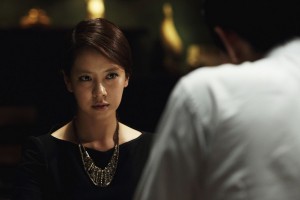 Compare to the casts’ previous films, they have different sides of personalities when portraying their own characters in New World. I was totally surprised about Lee Jung Jae and Hwang Jung Min. I have seen some previous films that they had acted as either a humour or sentimental character. By the time they act in the New World, they played totally different character which I would not expect that they will go crazy and kill people. Choi Min Sik has done it again in being the mastermind, Hyung Chul. He tries to make the character who is in control yet feel sorry for Ja Sung even though he has some greed and intention. Although Song Ji Hyo didn’t featured herself much in New World, she still has the charismatic vibe with her eyes that give me some chills. She may look calm but she can bite the audiences up with strong words and cold gestures. 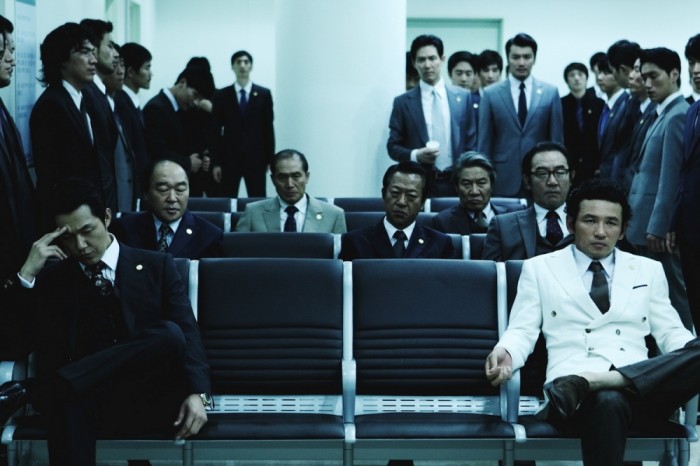 Who is the next successor of Goldmoon?

New World has made me shake with fear and excitement. My mind is totally twisted when watching the battle among cops and gangsters. I am shocked and disbelief but the storyline is made up more interesting. Every minute, from the beginning to the end, is a good bloody mess. In the end, guess who is the successor, winner, and mastermind of New World? There is a back story about Ja Sung including the time when he met Hyung Chul and Jung Chang. Although there might not be a sequel about Ja Sung’s back story, it would be great if Park continues to do that. It is a definite great start for Park to showcase his talents in filmmaking and scriptwriting. We shall see what he will come up next.