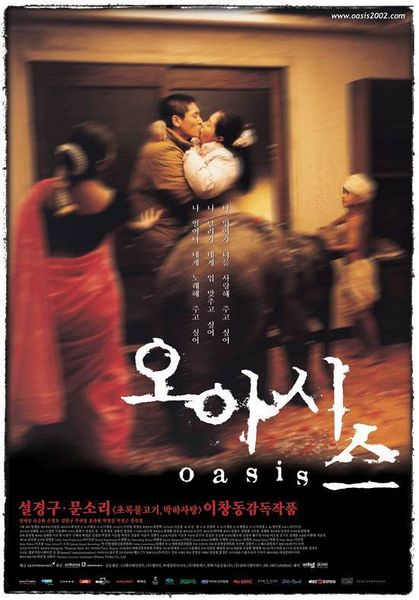 Jong Du (Sol Kyung Gu) just released from prison, where he served for three years, because of a hit-and-run accident. He finds that his family has moved without telling him. Jong Du is a social misfit and mentally disturbed person. He got himself into trouble for not paying for the meal at a restaurant. The family, reluctantly, takes him back. One day, Jong Du decides to visit the victim’s family. The son is moving out of the house and leaving behind his sister, Gong Ju (Moon So Ri) who has cerebral palsy. The neighbours take care of her while her brother checks on her. Even though her family kicks Jong Du out of the house, Jong Du starts to like her even more.

Here is my thought in my mind: Oh my god! Yes, that’s what I think. The film blew my mind away and left my mind having the ‘no comments’ scenario. If you were in the audience with me, you could see my over-the-top reactions I have while watching this film. At first, I thought it would be a couple who met at India and become a lovely couple. However, this is totally different from what I thought it would be.

Jong Du is the character that I love and hate. I hate him because I couldn’t accept him as a person who didn’t care about how people think. It is the lack of common sense and respect that he has. Besides that, he does have a little bit of sweet side, well only to Gong Ju. There are times that I clenched my fist or cover my mouth or sighing. It is a complicated character which I have no idea what’s wrong with him but Kyung Gu has managed to grab hold to the character which gives a perfect bang to the film.

‘Oasis’ is a shocking and difficult film to watch but it is also impressive. The characters will make you either love or hate. Yet, it all comes to the point on how people are accepted by the society and their own family and friends. Also, the couple are in their own world of love and happiness where no one would try to break them apart. Although I have the biggest reactions that I ever had throughout my whole life while watching Korean films, but this is by far the best one that I’ve seen.