RE;CODE, launched in 2012, redesigns the clothing through the use of overproduced stock materials. It is not just fashion, but the aim is to reduce the waste of consumer goods and bringing the creativity of re-design. They have collaborated with independent designers, charities, and corporations. To them, ideas and processes are vital in creating items that can be cherished in timeless moments.

Military collection which is made of military tent, uniform, and parachute (Source: RE;CODE Official Website)

The three-step process is involved among the stakeholders:

(2) Independent designers use their creative talents in re-designing the clothing with best choice of fabrics.

(3) Consumers will find out about the meaning behind these re-design clothing which leads to increase on purchasing behaviour. 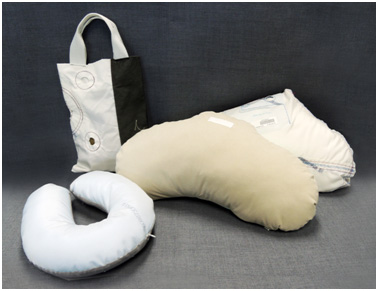 Industrial collection which is made of materials from car interiors (Source: RE;CODE Official Website)

Last year in November, I visited the RE;CODE booth at the Korean Brand & Entertainment Expo. I was amazed on how the recyclable materials can assembled into sustainable fashion and accessories. Materials (eg. military uniforms, parachutes, tents, and parts from car interior) which are useless are put into good use. They have creative innovation and ideas to not only creating trendy fashion but also being environmental friendly which can reduce wastage and environmental footprint. It takes a long-term process for re-designing the clothing but they have put in a lot of effort in promoting environment through the forms of sustainable fashion.