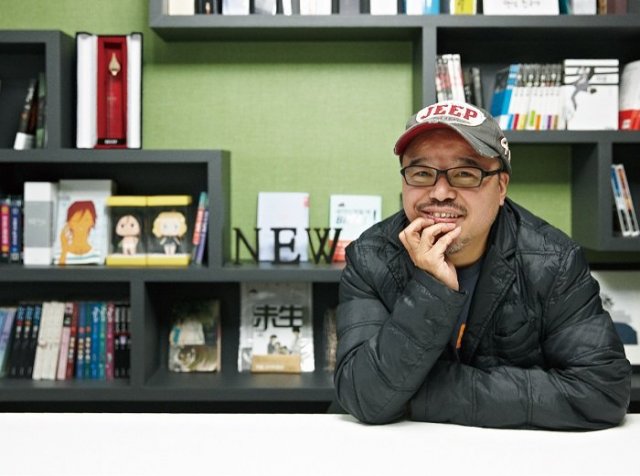 The London Book Fair 2014 not only showcases Korean literature and translation, webtoons, a new trend in Korean digital comics, are also featured to the visitors. Webtoons, known as online comic strips with serialized stories, are frequently updated on real time. Not only these can be viewed on PC, they can also be viewed on smartphones and tablets. Naver and Daum are the most popular search engine webtoons section. With speedy Internet and advance online technology, unlike other digital comics, readers scroll down to see the whole comic which evoke their curiosity and excitement. The readership of webtoons is slowly increasing. It has reached out to the public, including adults, in the new golden age.

Yoon Tae-Ho, a well-known graphic novelist, talked about the overall “behind-the-scenes” and trends of Webtoons at the KCCUK. Yoon, born in Gwangju in 1969, showed both of his talents and passion for graphic novels from an early age. After receiving guidances from Jo Unhak and Heo Yeongman, he published his first work Emergency Landing in 1993. Yoon’s works in both traditional printed media and Webtoon received great responses from readers. With his successful publication of works (Yahoo, Moss, and Incomplete Life), he won the top honour in Korea Content Awards: the Presidential Award in 2010 and 2012. Moss has been adapted into by film, directed by Kang Woo-Suk. Incomplete Life has one of the highest number of sales and online views. Recently, Incomplete Life is adapted into a drama.

Differences in Creating Webtoons for Print and Digital 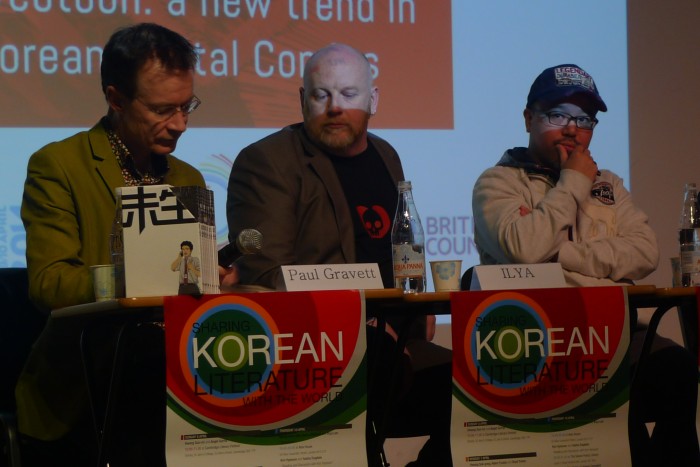 With Paul Gravett and ILYA, an author for graphic novel ‘Room for Love’

Yoon pointed out the differences between print and digital platform. The print edition is based on the editor’s decision and available at physical stores. For digital platforms (such as Naver and Daum), the portal manager published the graphic novelists’ works as these platforms have a wider webtoon readers base. Their works are also easily adaptable to other forms online.

The most important aspect of having their works published online is the interaction with the readers who response to each episode. While it takes one to two months to receive comments about the physical graphic novels, readers comment about webtoons instantly. Graphic novelists are able to adjust their works that suits the readers’ comments and suggestions. In Incomplete Life, a story about a salaryman, Yoon never experienced in working in an office. So, he had to conduct interviews to know about the office life and looking into the readers’ comments. It is a meaningful learning experience for him. 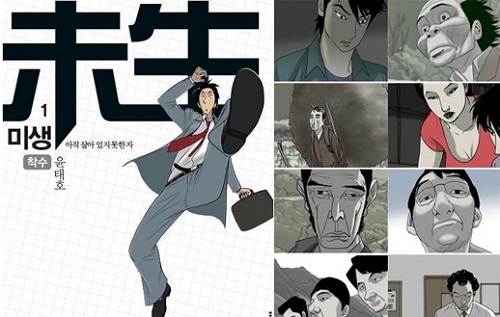 Yoon talked about Moss and Incomplete Life as examples of their structure that are published in Daum. He and his team have to do episodes twice a week. Moss is based on scrolling down while Incomplete Life is in page unit. In each episode, they have to create 125 frames/fifteen pages/240 panels to incorporate into the scrolling concept. They also have to look into the artwork and word bubble positioning. Most importantly, the team focus on the center and composition of the works. In Yoon’s point of view, he prefers to complete the finished format and then applied to the scrolling format. As for the word bubbles, the positioning to put in and out of the panel is based on the readers’ speed.

The “in-depth” process of making the webtoons not only based on their ideas and conceptual serialized storylines but the team take the readers’ responses into consideration. Graphic novelists want to keep the interaction with readers through every single aspect of the works that continuously attract the readers’ attention and maintain the relationship with readers. It is a combination of ideas that are applied in creating engaging webtoons. 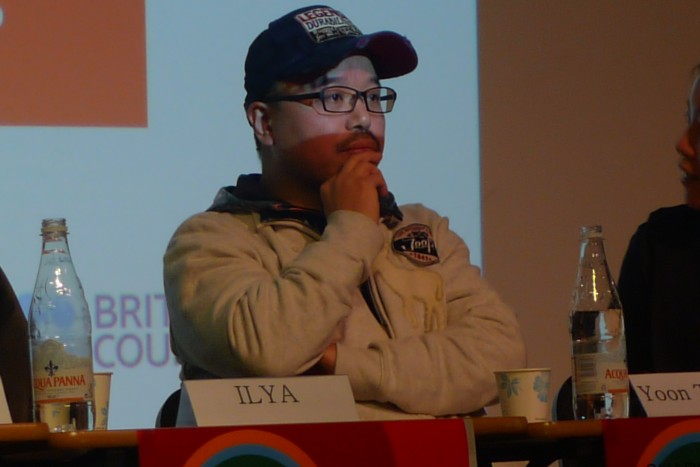 In terms of payment, artists are paid for each episode and the final work. If the film industry wants to purchase the rights of webtoon, it will be easier for them as they will be able to monitor the views, readers’ comments, and loyalty to a story. This will help graphic novelists make better decisions. Another way to gain income is companies place adverts on the page which is related to the content written by graphic novelists. To purchase the finished works, they have to pay based on the price which are set by the artists. Like other artists, Yoon has the right for all the stories and revenue from advertisements.

Most of the characters in Yoon’s works have their own personal struggles and issues. Yoon believed that it is important to share the reality of what is happening in the world to the readers. He doesn’t want to be biased and separate between hero and villain in his story. He believed that the readers can follow his story, understand the reality, and come up with their own conclusions.

He has his assistant who help out in the working process. He sleeps three days a week and spends most of his time in the studio. So far, he has only created 30 works. It took five years making Moss and four years making Incomplete Life. During his free time, he sleeps or have drinks with his friends. Still, he is still happy with his life as he enjoys doing what he loves.

In his latest project, he wants to showcase about the Korean war history which, surprisingly, not many people, including the young generation, know about that. It is about the time after the Japanese occupation, end of World War II, and when American allies came to Incheon. He wants to depict the pain and suffering that were shown during these time periods. He wants to address how an individual have to go through these harsh times.

Adaptation of Webtoons and Manhwa 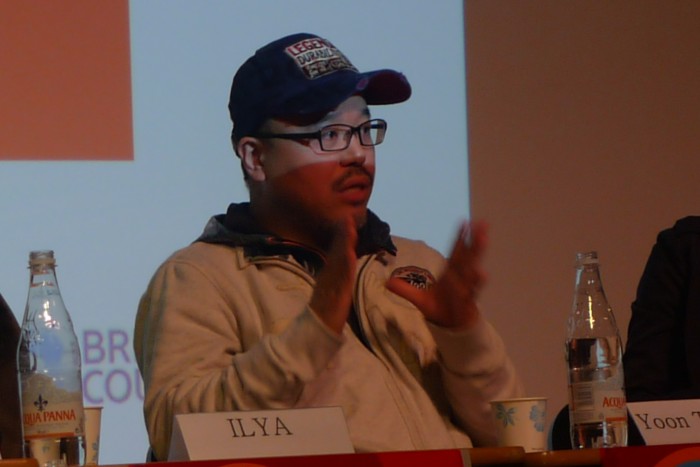 At the end of discussion, Yoon was asked about the adaptations of webtoons and manhwa. Moss was adapated into a film, directed by Kang Woo Suk. Yoon took part in the filmmaking process. There were a lot of discussions about the characters and decision making about certain elements of his work.  Yoon said that comic book writing is a private process. When the webtoon and manhwa are being adapted, artists have to make the works suitable to the readers. However, when the artists realized that their works have been adapted into the film, it affects the uniqueness and originality of their works especially their imagination. They have to think about certain elements such as production costs if their works turned into films.

The discussion gave me a broad understanding of how the webtoons are published before and after including the financial model and “behind-the-scenes” creating webtoons. Similar to digital platforms, webtoons build and maintain the relationship between readers and artists. The artists share their stories, both imaginations and realities, visually in detail. They also consider the readers responses as some might have experience these related storylines. It is a connection with readers while breaking the location boundaries. I do agree that adapting webtoons into films and even dramas could affect its originality. Both artists and readers will questioned and compared between two different media that show original and/or changes of the content.

I read some of the webtoons including Yoon’s work. The webtoons have excellent detailed quality in both graphics and storyline based on different genres. I continued to scroll down till the very end of each episode and move on to the next one because I want to know what happens next. There are times that I cannot leave my phone and tablet till I feel that a sub-plot of the serialized story ended. Then, I would read the next sub-plot another time. I can see that the graphic novelists put in time and effort, even passion, to create webtoons within tight timing schedules on weekly basis. They reflect theirs and readers’ experiences in the real world and popular trends. Webtoons are definitely the new trend of Korean digital comics, not just in Korea, but also to the rest of the world.

Yoon’s published works can be viewed at Daum (Moss and Incomplete Life). View other webtoons at Naver (Korean and English) and Daum (Korean).