The Moon Jar (달항아리) symbolizes the relationships between the UK and Korea. Moon Jar refers to the shape and colour of moon. These were made with the combination of two separate parts makes the base of the diameter smaller than the mouth which makes the shape not fully symmetrical.

During the late 17th to 18th century, these were used for storing food and displaying flowers. The Moon Jar presents itself with purity and simplicity of whiteness. On the other hand, in the Joseon era, Moon Jars symbolizes the authority of the royal family. However, due to the Japanese invasion (1592) and Manchu invasion (1636), Joseon became known as the ‘Hermit Kingdom’. That era has limit Joseon’s participation in ceramic pottery business. In the 20th century, the Moon Jar became known to the West including the UK. In 1883, British studio potter, Bernard Leach, who visited twice in South Korea was amazed with the Moon Jar which made him decide to purchase. Till the Second World War, he passed the Moon Jar over to her friend, Lucie Rie, also a studio potter. She took care of the Moon Jar till her death. The Moon Jar is currently at the British Museum. The Moon Jar is recognized as the symbol of Korean cultural identity. Korean and other artists were inspired of its distinctive art form that tells its stories and life. 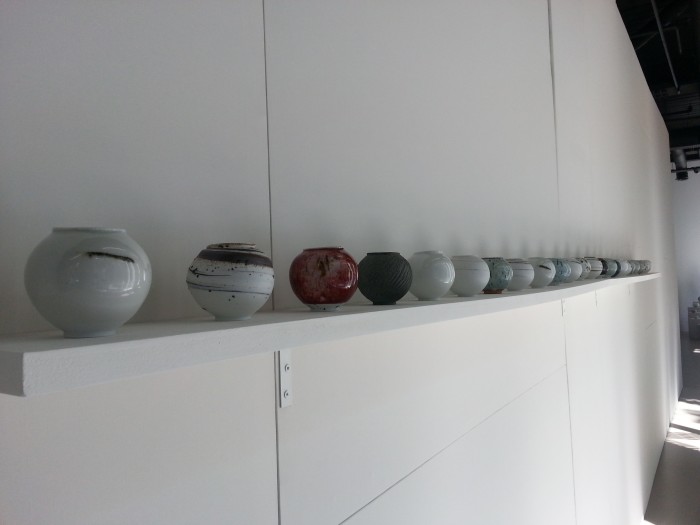 Adam Buick’s works explore experiences with landscape that is shown in a moon jar. He takes the moon jar as his own canvas and made his works breathtaking. These works expresses the beauty and perfection on the natural landscape of Pembrokeshire. The presence of his surroundings with landscapes could be express in many different ways. As you see the patterns on the moon jar, these represent the natural landscapes that he experienced in past and present. 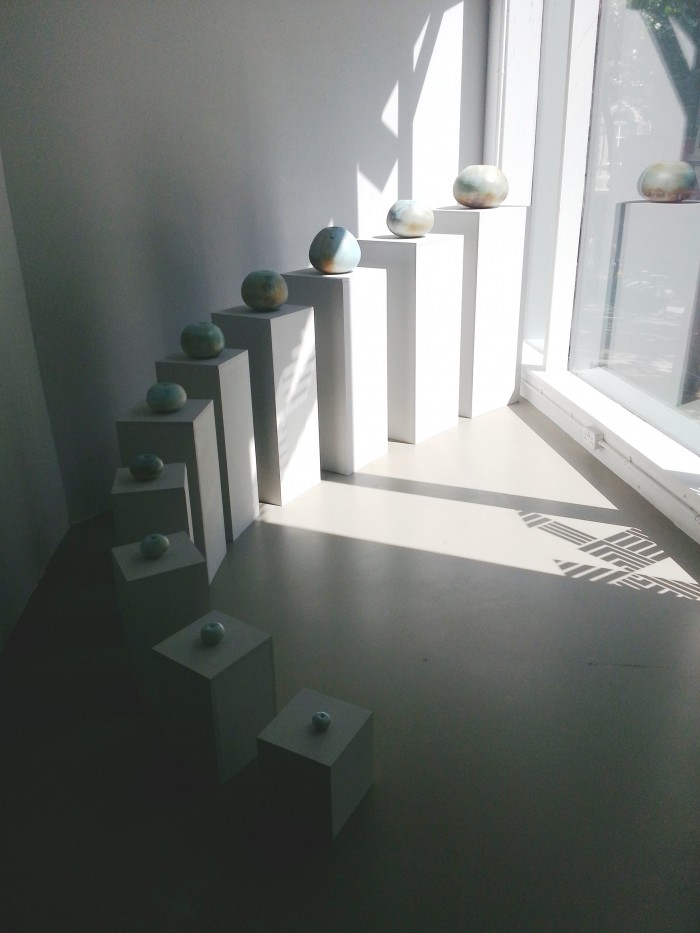 Jack Doherty was inspired by the Moon Jar’s presence of beauty. He has decided to bring these moon jars bold and comfortable with their place in the world. These works are focused on their true form, volume, and surface. 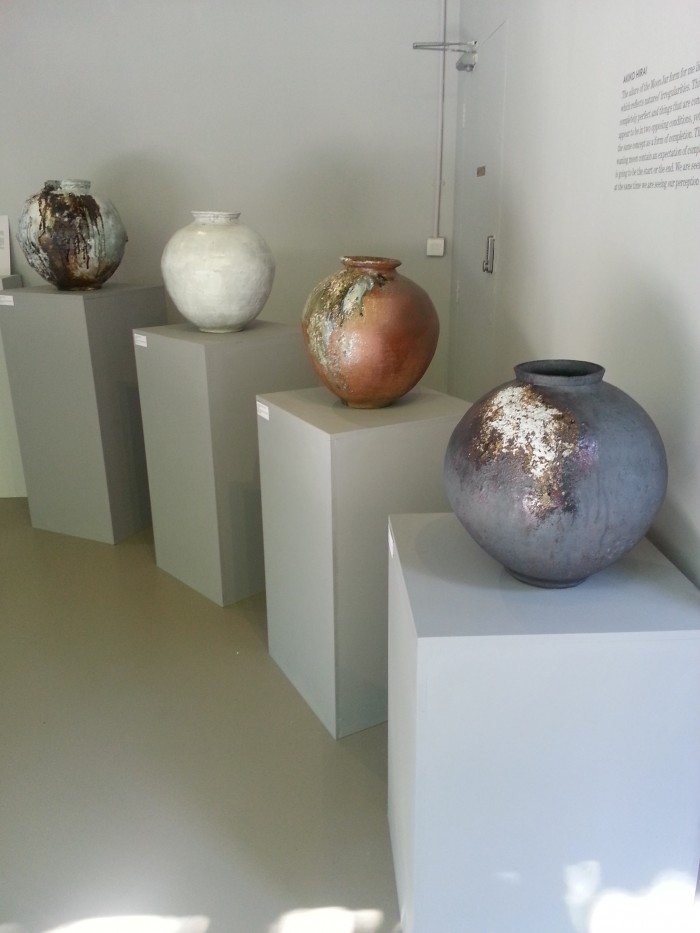 Akiro Hirai creates the Moon Jar in a totally different form. With her inspiration on how the shadows are surfaced on the moon in the night sky, she created the moon jars that has dents and stained surface which represents its aging. This represents the perception of time as moon jars ages. To her, she sees many different aspects from the moon jar with balance of imagination and life. Her works goes through conditions from experience in gaining information from its surroundings like emotions, motions, and heat. 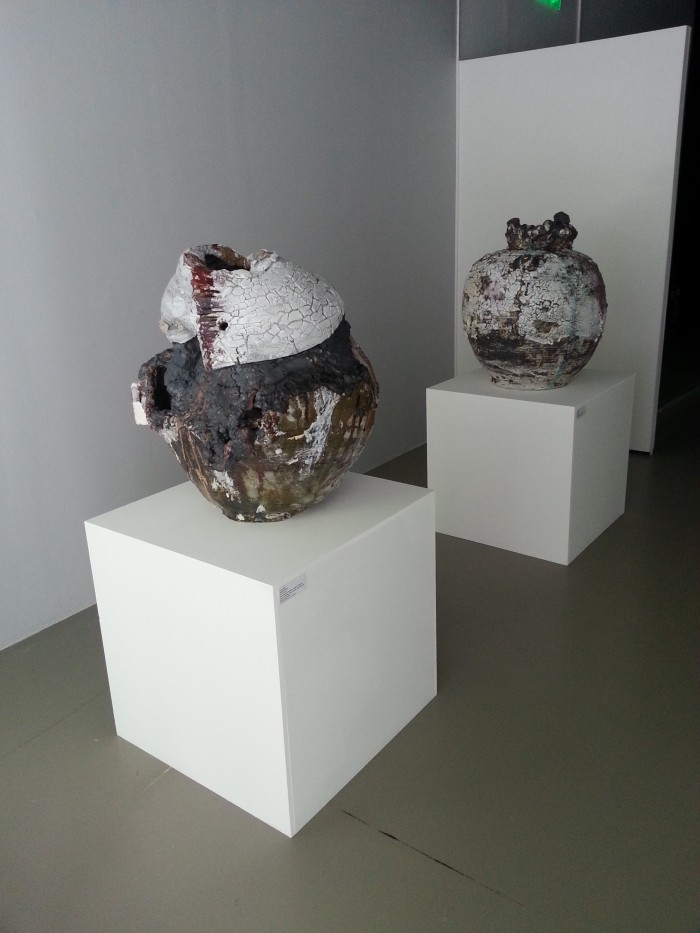 Gareth Mason thinks outside of the box while reviving the moon jar. He believes that imperfection is beauty. So, he ruins the symmetrical form of moon jar by altering the shapes and inputting objects on the moon jar. 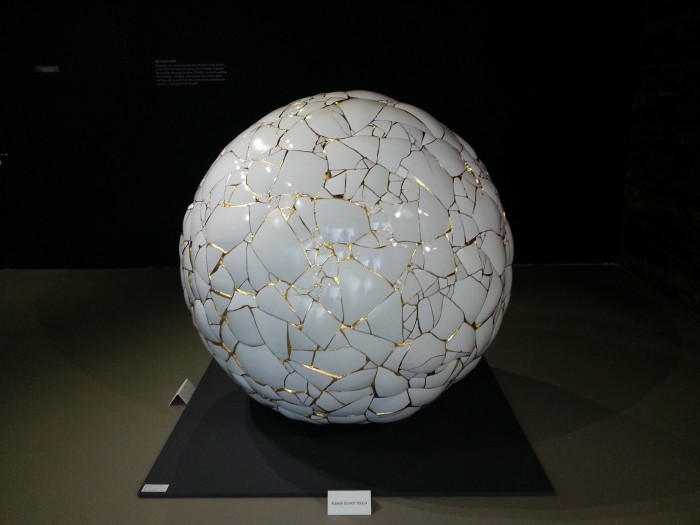 Yee Soo Kyung collected the ceramic fragments and combine into artworks for Translated Vase Series, The Moon. She puts them together like a jigsaw puzzle and covered the seams with 24 carat golden leaf. She translates the work and mend their wounds. Although her work is not truly symmetrical, but these are breathtaking self-form masterpieces that can’t be missed.

The Moon Jar is like a person who is going through time and space in life. This exhibition is truly remarkable for its beauty and perfection. Artists could understand how a single object represents different perspectives. Park Young Sook quoted that “In the month it takes to create a single piece. One can understand the cycle of life”. These artists have created and revive the moon jars in different forms that can be shown to the public. The moon jar’s beauty cannot be looked away by the public because of its purity as James Joyce said that “The tranquil inscrutability of her visage: the stimulation of her light, her motion and her presence”.