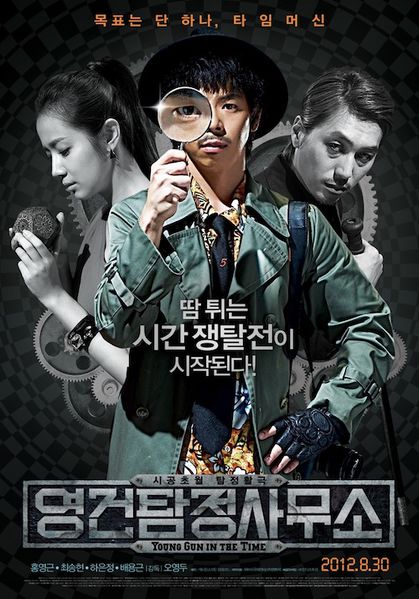 Detective Young Gun (Hong Yeong Geun) is having money troubles while solving minor cases. One day, Song Hyun (Choi Song Hyun) comes to the office and asks Young Gun to kill a man. Unfortunately, due to his moral code of honour, Young Gun refuses her request. Later, after she leaves, he decides to follow her but he saw Song Hyun killed in a car accident. He is shocked by her death and decides to investigate her background and request. Suddenly, he finds a woman who looks exactly like Song Hyun. He then realizes that he met the woman who is Song Hyun from three days in the future. Song Hyun asks Young Gun to save her and find the time machine within three days.

You will be on an adventure with the detective who solves the mystery of time traveling because of the time machine that could change the whole time flow. Young Gun is determined to solve the case even if he has to serve in every nook and cranny including some places which can be awkward. In terms of editing and camera shots, it was perfectly show how each scene is moved one by one that keeps the audiences attached to how the detective solve the case.  From the beginning, like the detective, I was slightly confused about Song Hyun’s exactly same identity. Later on, the whole story comes to the point about the time traveling. The whole storyline set within three days while, at some point, the time traveling was intriguing.  I was interested with how Song Hyun tells the mystery of time machine and time complications.

There is a mix of comedy and action in this film. It’s not the kind of laughter that would hurt your stomach badly. It is the kind of laughter when unexpected yet slightly awkward scenarios just showed up within minutes. For example, the detective has to find the ‘precious’ beetle for his client or when his boss is acting all high and mighty while pursuing her ‘dreams’. This film is much more of an action mystery film since the detective has three days to solve the case and save Song Hyun from disappearing into thin air. Besides solving cases, the detective has to fight with his baddies by using his fighting skills and his mechanical gun hand. He reminds me of Inspector Gadget who has a kind heart and gadgets in solving cases.

The relationship between Young Gun and Song Hyun begins to blossom while working together to find the time machine. It’s so sweet of Young Gun to make some first love moves on her. For him, he is attracted by Song Hyun’s beauty and personality that made him want to make her happy and doesn’t want to let her go. They are the perfect duo to solve the case even though Song Hyun can be funny when it comes to telling the whole story about her senior’s mystery death. At times, there were dramatic moments that Young Gun could not let go of Song Hyun for the better good. Yet, the love makes him stronger and determines to save time from being messed up by the big bad boss.

I feel sorry for the big bad boss even though he has gone mentally mad on getting the time machine so he can control time with his own bare hands. He did have a hard time with his boss and he wants to have the power of his own. How he was treated badly makes him become the bad guy who kills the innocence just to get what he wants. When he fights, it made me cringe but expected how the fight should be with fists and weapons. Yet, on the bright side, without the bad guy, then the story would not be that interesting and as obstacles for the detective.

Although the detective wears his Hawaii outfit and solves cases, he is one good detective who is determined to fulfil the mission, while fighting, and has a kind heart to care about the community in need. I am happy with both the story and cinematography that makes me fasten my seatbelts as I was on a time-travel mystery. It doesn’t make you laugh that much but it’s an interesting story to watch and enjoy. A detective who solves the time travel case is an interesting treat, indeed. It would be great that if this was a drama series. If that happened, I would definitely watch the detective Young Gun adventures.